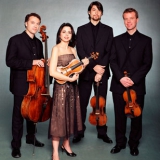 Recognized for its virtuosity, exuberant performance style, and often-daring repertory choices, over the past two decades the Pacifica Quartet has gained international stature as one of the finest chamber ensembles performing today. The Pacifica tours extensively throughout the United States, Europe, Asia, and Australia, performing regularly in the world's major concert halls. Named the quartet-in-residence at Indiana University's Jacobs School of Music in March 2012, the Pacifica was also the quartet-in-residence at the Metropolitan Museum of Art (2009 – 2012) – a position that has otherwise been held only by the Guarneri String Quartet – and received the 2009 Grammy Award for Best Chamber Music Performance.

Formed in 1994, the Pacifica Quartet quickly won chamber music's top competitions, including the 1998 Naumburg Chamber Music Award. In 2002 the ensemble was honored with Chamber Music America's Cleveland Quartet Award and the appointment to Lincoln Center's CMS Two, and in 2006 was awarded a prestigious Avery Fisher Career Grant, becoming only the second chamber ensemble so honored in the Grant's long history. Also in 2006 the Quartet was featured on the cover of Gramophone and heralded as one of "five new quartets you should know about," the only American quartet to make the list. And in 2009, the Quartet was named "Ensemble of the Year" by Musical America.

The members of the Pacifica Quartet live in Bloomington, IN, where they serve as quartet-in-residence and full-time faculty members at the Jacobs School of Music. Prior to their appointment, the Quartet was on the faculty of the University of Illinois at Champaign-Urbana from 2003 to 2012. The Pacifica Quartet also serves as resident performing artist at the University of Chicago.