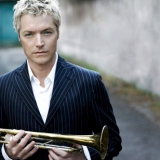 "It's nice when they (graduate)," Baker said in a 2006 article in the Indiana Alumni Magazine. "But if they're ready to go play, they should go."

After studying with Baker and Bill Adam at IU, Botti has gone on to a career that includes performances with Sinatra, Natalie Cole, Paul Simon and Sting, along with a stellar solo effort. He has also performed with many symphony orchestras in the U.S. and abroad.

Botti frequently talks about his time at IU at concerts.

"I'm really glad I went to Indiana," he said in the IAM article. "On Friday and Saturday nights, I never went out. I practiced my instrument. The reality is that most musicians are not really well-rounded people. It's music and the trumpet. That's really all I ever wanted to do. It's all I've known."