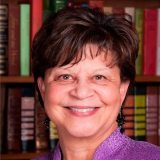 The relationship that Rose Mays and her husband William had with Indiana University runs long and deep. Both graduates -- Bill earned his bachelor's degree in chemistry in 1970 and a master's in business administration in 1973, and Rose obtained her master's degree and Pediatric Nurse Practitioner Certificate in 1974 -- they have touched virtually every aspect of IU's educational mission through their involvement, passion and generosity.

The Mayses' philosophy has been to give broadly in an attempt to strengthen the entire university community. Students across a wide range of disciplines on multiple campuses, including IU Bloomington, Indiana University-Purdue University Indianapolis and IU Southeast, have Rose and Bill to thank for helping them attain their dream of a college education.

Though they have literally supported hundreds of programs, the Mayses have generously supported the IU Kelley School of Business in both Bloomington and Indianapolis and the IU School of Nursing, where they funded scholarships, fellowships, professorships, lectureships and research aimed at improving diversity. They also established several endowments that promoted diversity including the Joy J. Mays Endowment Scholarship School of Education, the Theodore C. Mays Chemistry Fellowship and the Rose M. Mays Excellence in Teaching Diversity Fund at the IU School of Nursing.

Additionally, the Mayses established several RISE (research, international, service learning, experiential learning) Scholarships at IUPUI for men and women in business, nursing and public health, and were among the founding donors for the IU School of Diversity School of Dentistry Diversity Scholarships.