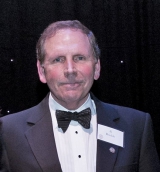 Albert "Al" Reichle and Lynn Gassoway Reichle, of Valparaiso, have a contagious enthusiasm for all things Indiana University.

Al graduated from Valparaiso University and later earned his MBA from IU Northwest. He established a successful 33 year career with Transtar, a transportation conglomerate. Following his retirement, Al spent the next eight years as a Corporate Jet Captain. Since retiring from flying, he has been honing his musical skills playing the trumpet.

They were inducted into the IU Foundation President's Circle, and retain ongoing membership in the Well House Society, the 1820 Society, the Arbutus Society and are life members of the IU Alumni Association.

Seeking meaningful ways to share their IU experience and success with others, Al and Lynn endowed a scholarship in the Wells Scholars Program.