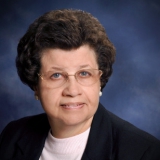 Kay Frances Lindsey, is an alumna of IU Southeast in New Albany. She received both her bachelor's and master's degree in education from IU Southeast.

"Kay has a servant's heart," said Clarence Boone Jr., BA'81, MPA'84, IUAA associate director of alumni communities, who nominated Lindsey for the President's Award. "She is the 'behind-the-scenes' catalyst that ensures the success of many programs and initiatives."