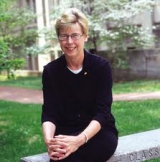 Brehm served as IU Bloomington chancellor and vice president for academic affairs from 2001 to 2003. She later worked as a professor in the IU College of Arts and Sciences' Department of Psychological and Brain Sciences and served as president of the American Psychological Association.

Brehm created an estate gift that will fund an endowed chair in the Department of Psychological and Brain Sciences at IU Bloomington. In 2011, she was inducted into the Presidents Circle, IU's most prestigious donor recognition society.

Born and raised in Roanoke, Va., Brehm has a bachelor's degree and a doctorate from Duke University, and a master's from Harvard. Before coming to IU, she held college and university administrative positions at the University of Kansas, the State University of New York at Binghamton and Ohio University.