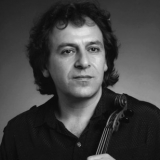 Kevork Mardirossian's concert career started when he won the Gold medal and First prize at the Obretenov Violin Competition in 1978 in Bulgaria, as well as the Gold medal at Katya Popova International music festival in 1979. Since then, Mardirossian has performed as concerto soloist, recitalist and chamber musician throughout Bulgaria, the former Soviet Union and Eastern Europe before moving to Europe, where he developed an impressive solo career, with tours of England, Wales, Italy and the U.S., including debuts in London and New York's Carnegie Recital Hall in 1992. He has appeared as guest artist at international music festivals in Cheltenham, England, the European Cultural Months, and the International Chamber Music Festival in Plovdiv, Bulgaria, the Czech Festival in Trento, Italy, the Sofia Musical Weeks, and many others in France, Germany, Spain, Japan and China.

In 1980 he became the concertmaster of Plovdiv Philaharmonic until 1988 when he moved to the US, where he was appointed artist-in-residence at the University of Central Arkansas. There he also co-founded the Kapele Trio with pianist Lee Phillips and cellist Felice Farrell. From 1995 to 2008, he was the violin professor and String chair at the College of Music and Drama at Louisiana State University. He came to Indiana University in 2008.

Through the years, Mardirossian has established himself as a highly respected violin pedagogue and devoted mentor to many outstanding students, many of them winners in numerous national and international competitions. Others, can be found in worlds leading orchestras and universities in the US, Europe and Asia. Several of his students have gained positions with London Symphony, LA Philharmonic, Houston Symphony, Baton Rouge Symphony (concertmaster) and Saint Gallen and Zurich Opera Houses in Switzerland, as well as faculty positions in different music schools and conservatories in the U.S. and abroad.

Mardirossian is a British Council Scholar and is the recipient of LSU Distinguished Faculty Award, the LSU School of Music Award for Excellence in Teaching, the Galante Professorship, and the prestigious San Diego II Alumni Professorship.

He presents regular master classes in Europe, Asia and the US in most major schools and universities.