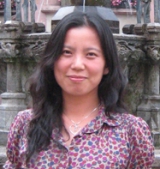 Hui-Chen Lu received her Bachelor of Science in Biology from the National Taiwan University in 1991. She came to the United States to earn her Ph.D. in Developmental Biology from the Baylor College of Medicine in 1997. She stayed at Baylor to do post-doctoral research. She became a faculty member in 2003 and worked in the Jan and Dan Duncan Neurological Research Institute before coming to Indiana University in 2014.

Lu's primary research interests are to elucidate the signaling cascades that establish neural circuit connections during brain development, to understand how sensory experiences affect neural circuit wiring and cognitive behaviors, and to identify novel factors required to maintain the health of neural circuits during aging. These interests spanning an organism's entire life are driven by a growing appreciation that mis-wiring of neuronal circuits during early life is likely to be a major cause of neurological disorders, including autism and schizophrenia, while during adult life deteriorating neural networks lead to cognitive decline and dementia. A genetic dissection of the role of mGluR5 signaling in neural circuits and behaviors.