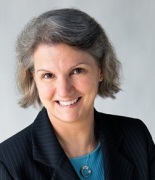 Barb Bichelmeyer joined IU Bloomington in 1996 as an assistant professor in the School of Education. She became an associate professor in 2002 and a full professor in 2009. From 2007 to 2009, she served as associate dean of faculties for IU Bloomington, a role in which she was responsible for implementing the first campus-wide general education curriculum, as well as for establishing transfer agreements with Ivy Tech Community College.

In 2009, she accepted the role as associate vice president for university academic planning and policy. She was tapped in April 2011 to lead a university-wide effort to elevate and align IU's online education offerings across all campuses. In 2013, she was named interim chancellor at IU Southeast.

As professor, Bichelmeyer's expertise is in the areas of human performance improvement, instructional and program evaluation, instructional design and online instructional environments. As associate vice president, her responsibilities include planning, policy development, external relations, government relations and intercampus coordination of academic and faculty affairs. As director of the Office of Online Education, Bichelmeyer is responsible for coordination of online education at IU. Since leaving IU in 2015, Bichelmeyer has been provost and executive vice chancellor at the University of Missouri-Kansas City, where she also holds the rank of professor in the Henry W. Bloch School of Management's Department of Management.

Bichelmeyer has served as a consultant for the design, development and evaluation of instructional programs with organizations such as the U.S. Centers for Disease Control and Prevention, the American Legal Institute - American Bar Association, the U.S. Coast Guard, the National Collegiate Athletic Association, Sprint, Eli Lilly, Procter & Gamble, Microsoft and the Indiana Supreme Court Commission for Continuing Legal Education.

A Kansas native, Bichelmeyer earned bachelor's degrees in journalism and English from the University of Kansas. She also earned a master's degree in educational policy and administration and a doctorate in educational communications and technology from Kansas.

Bichelmeyer received the IU Bicentennial Medal in September 2019 in recognition of her distinguished service as interim chancellor of IU Southeast.