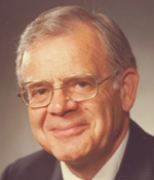 A man of many accomplishments and distinctions, Richard B. Stoner is most widely known to Hoosiers through his role as distinguished alumnus and trustee of Indiana University. His appointment to seven consecutive terms on the Board of Trustees - by Indiana Governors Edgar Whitcomb, Otis Bowen, Robert Orr, and Evan Bayh - reflects the esteem of Indiana's leaders. He served on the board for two decades, from 1972 to 1992, and was president of the board during the last twelve years of his service. His astute judgment in assessing the university's best interests, his wise guidance in ensuring those interests were well served, and his unfailing commitment to hearing and evaluating diverse points of view have benefited the university and its missions to the state in lasting ways. Among his other honors, he received the Distinguished Alumni Service Award of Indiana University in 1993.

A native Hoosier, Mr. Stoner was born in Ladoga and graduated from Indiana University, where he majored in business and excelled in many student activities. He was elected to Beta Gamma Sigma, a business honorary fraternity, and served as president of several campus organizations, including his senior class, Sigma Nu fraternity, and Union Board. Following graduation in 1941, he served in the United States Army, retiring with the rank of captain. In 1947 Mr. Stoner received the J.D. from Harvard University Law School and returned to Indiana to begin his career with Cummins Engine Company, in Columbus, Indiana. He worked in various administrative and executive positions at Cummins from 1947 until 1966, when he became executive vice president and corporation general manager. From 1969 to 1989, he was vice chairman of the board of Cummins Engine Company. He continues today as a director of Cummins Engine Foundation and Irwin Sweeney Miller Foundation.

In addition to his leadership at Cummins, Mr. Stoner has devoted his time and talents to other business enterprises in Indiana, as a director of Bank One, Indiana; Bank One, Indianapolis; PSI Energy, Inc.; and American United Life Insurance, Indianapolis. He also serves the state of Indiana as a lifetime director of the Indiana State Chamber of Commerce. Earlier, he was a member of the Indiana Employment Security Board, and chairman of the Higher Education Policy Commission, which led in establishing the Indiana Vocational Technical College system. He has been chairman of the Board of Trustees of Christian Theological Seminary in Indianapolis, a trustee of the International Convention of Christian Churches, and a member of the governing board of the National Council of Churches of Christ in the U.S.A.

In a lecture to students at Franklin College in Franklin, Indiana, in 1986, Mr. Stoner said, "Most influential in advancing the human race is civic duty. It is important that each of us take a positive view of our society, that we look to opportunities to build, not tear down, that each of us be a part of the solution rather than the problem." In his life and work, Richard B. Stoner is an exemplar of this belief, and he has inspired many others to follow it as a guide in public life.