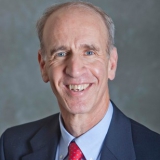 Bobby Schnabel was dean of the School of Informatics and Computing and interim vice president for research at Indiana University. Schnabel earned a B.A. from Dartmouth College, then an M.S. and Ph.D. from Cornell University. As an undergraduate, Schnabel served as the manager of the Dartmouth football team and was inducted into Phi Beta Kappa. Before beginning graduate school, he served in the U.S. Army National Guard, and continued to serve part time until 1977.

From 2015-2017, Schnabel held the position of CEO at the Association for Computing Machinery and since has been affiliated again with the University of Colorado at Boulder. He serves on the advisory committee for the NSF Directorate for Computer and Information Science and Engineering and on the board of code.org. He has served as chair of the ACM Education Policy Committee; as chair of the advisory committee for the Computing Alliance of Hispanic Serving Institutions; and on the boards of the Kinsey Institute, TechPoint, and the Indiana University Research and Technology Corporation. He has received many awards and recognitions including being named a fellow of the ACM (2010) and the Society for Industrial and Applied Mathematics (2009); the Computing Research Association A. Nico Habermann Award (2012); the University of Colorado Boulder Faculty Service Award (1998) and Teaching Award (1987); and was also named a White House "Champion of Change" for Women in STEM (2011).

Schnabel received the IU Bicentennial Medal in September 2019 in recognition of his distinguished service as the interim vice president for research at Indiana University.