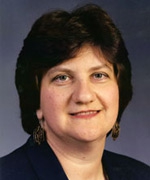 Instructing Gender Studies courses since 1995, her current research analyzes gendered dimensions of scientific research methodologies; the effects of oral contraceptives on sexuality and well-being in women; sexual behavior and risk for sexually transmitted diseases; and the long-term behavioral effects of prenatal exposure to drugs and hormones. Professor Sanders recently served as President of the Society for the Scientific Study of Sexuality, and has been a co-principal investigator on research grants from such agencies as the National Institute on Drug Abuse, and the National Institute of Child Health and Human Development. Dr. Sanders recently won the Distinguished Scientific Achievement Award from the Society for the Scientific Study of Sexuality.

Stephanie A. Sanders, PhD, Professor of Gender Studies and Associate Director of The Kinsey Institute, gave the inaugural lecture at the First National Debate on Sexual Health in Poland on September 12 , 2008 in Zielona Gora, Poland. The conference gathered representatives from Polish psychological, medical, sexological, cultural, and political environments to discuss the challenges facing Poland in regarding various aspects of sexual health.