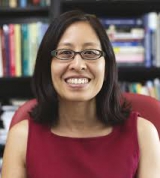 Before coming to Indiana University in 2013, Okamoto served as Assistant Professor, Sociology, at University of California-Davis (2001-2013), and was a Visiting Scholar at the Russell Sage Foundation, New York from 2004-05. She also served as Visiting Fellow at Stanford at the Center for Advanced Study in the Behavioral Sciences from 2011-12.

Along with her current titled professorship, she was named, Best of Social Sciences Fellow, College of Arts and Sciences, Indiana University in 2017.