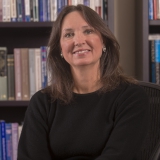 Dr. Anastasia Morrone began her educational journey at the University of Minnesota where she completed her undergraduate work in technical communication in 1980. After working for both Honeywell and the Control Data Corporation as a technical writer during the 1980s, she enrolled in a doctoral program in educational psychology at the University of Texas at Austin, finishing her Ph.D. in 1992. While there, she worked at the Center for Teaching Effectiveness. Dr. Morrone would then work as an adjunct professor and lecturer at St. Edward's University and the University of Texas at Austin respectively between 1991 and 1994. At that time, she accepted a position as a Visiting Assistant Professor at the University of Delaware. After a three year appointment, she joined the faculty at IUPUI in 1997, first as a visiting faculty member and later as a tenure track faculty. Dr. Morrone rose through the faculty ranks and became a full professor in 2015. Concurrent with her academic appointments, she also served as Executive Director for the IUPUI Center for Teaching and Learning from 2002 until 2006. Dr. Morrone then accepted the position of Associate Dean, later Associate Vice President, of Learning Technologies.

Dr. Morrone's research has focused on four primary topics, adolescent development, educational psychology, research methodology, and theories of learning. She has delivered dozens of presentations on around the world and has published over two dozen peer reviewed articles on these subjects. Over the course of her career, Dr. Morrone has received numerous awards, grants, and recognitions. She has been awarded the Trustees Teaching Award from IUPUI in 2003 and is a past winner of the Benjamin and Dorothy Fruchter Annual Prize in Excellence in Educational Psychology. She has also received grants from the Department of Health and Human Services and National Institute of Health.