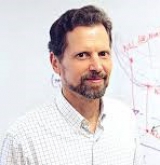 John K. Kruschke is Provost Professor of Psychological and Brain Sciences, and Adjunct Professor of Statistics, at Indiana University in Bloomington, Indiana. He is eight-time winner of Teaching Excellence Recognition Awards from Indiana University. He received the Troland Research Award from the National Academy of Sciences (USA), and the Remak Distinguished Scholar Award from Indiana University. He has served on the editorial boards of various scientific journals, including Psychological Review, the Journal of Experimental Psychology: General, and the Journal of Mathematical Psychology, among others.

After attending the Summer Science Program as a high school student and considering a career in astronomy, Kruschke earned a bachelor's degree in mathematics from the University of California at Berkeley. As an undergraduate, Kruschke taught self-designed tutoring sessions for many math courses at the Student Learning Center. During graduate school he attended the 1988 Connectionist Models Summer School, and earned a doctorate in psychology also from U.C. Berkeley. He joined the faculty of Indiana University in 1989. His current research interests focus on moral psychology.