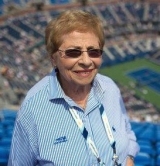 As an IU student in the late 1940s, Phyllis "Woodie" Walker faced three career choices. Upon graduation from IU, she could become a teacher, a nurse, or a secretary. Instead, she became a legend in the field of tennis as a professional umpire.

Walker has won numerous awards for her services to tennis, including a 2017 Special Recognition Award from the United States Tennis Association. Also in 2017, the Woodie Walker C.A.R.E. Award, a new USTA award, was presented at the U.S. Open in her honor. Even though she "officially" retired in January of this year, she still does consulting work for the USTA.