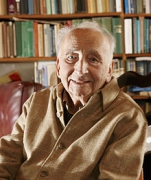 Born in Hungary in 1916, Sinor received a rigorous academic training in Altaic linguistics. Between 1939 and 1948, he received several fellowships in Hungary and France, where he held various teaching and research assignments. After the war, where he served as a member of the French Resistance and later in the Free French Forces, he joined the faculty of Oriental Studies at Cambridge University. During that time, he wrote the HISTORY OF HUNGARY and more than 100 articles and reviews on the linguistics and histories of Inner Asia.

In 1962, he moved to the United States, bringing his expertise to Indiana University where he created the Department of Uralic and Altaic Studies, now Central Eurasian Studies. In and outside of the department, through scores of publications, articles, reviews, and encyclopedia entries, Sinor worked to promote an appreciation of Inner Asia beyond its geographical and political neighbors, China and Russia. At IU, Sinor established two key and renowned resources for Inner Asian Studies. In 1967, he founded, and until 1981 directed, the Asian Studies Research Institute, known today as the Research Institute for Inner Asian Studies, whose collection of materials is unparalled. Sinor received many honors within and outside the United States. He was a member of the French and Hungarian Academies, he was an Honorary Professor of the Oriental Institute of the Russian Academy, was twice the holder of a Guggenheim Fellowship, and was repeatedly honored by UNESCO. The Royal Asiatic Society of Great Britain has established a medal named after him.

But perhaps Sinor's most significant contribution to Inner Asian studies and Indiana University is the since 1963 federally funded Inner Asian and Uralic National Resource Center (IAUNRC). The only one of its kind in the country, the center has helped train and support a strong lineage of scholars and has helped support the study of such languages as Estonian, Finnish, Hungarian, Mongolian, Persian/Tajik, Tibetan, Turkish and Uzbek. IAUNRC is certainly recognized as the best in the nation, if not in the world.