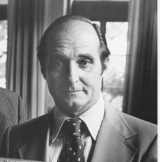 Widely recognized for his leadership of the School of Business and in the central administration of Indiana University, W. George Pinnell was intimately involved with every important academic, fiscal, organizational, and political issue facing IU for nearly four decades.

He came to IU to study for the DBA degree and then joined the faculty of the School of Business. Later, as dean of the School of Business, he was instrumental in expanding the business curricula on IU's regional campuses and establishing a consortium to encourage graduate business courses at Black colleges, as well as dramatically developing the school's international involvement and astutely promoting closer ties between IU and American business communities.

In 1971 he was named vice president and treasurer of the University, and three years later he was named executive vice president. In this position, he served with a steady hand and keen insight into the management of this increasingly complex major educational institution. In 1983 he assumed additional responsibilities as president of the IU Foundation, where his unmatched spirit and enthusiasm permeated the organization, assured the success of the Campaign for Indiana, and influenced the course of the University well into the 21st century.

Named for him, the Pinnell award was established at Indiana University in 1988 and recognizes faculty members and librarians who have shown exceptional breadth of involvement and depth of commitment in service to the university, to their profession, or to the public.