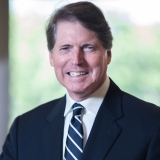 Gwyn Richards is the David Henry Jacobs Bicentennial Dean and professor of music (choral conducting) in the Jacobs School of Music at IU Bloomington. Richards earned his B.M.E. and M.M. from the University of Michigan. Upon graduation, he was selected as one of 12 conductors for the NEA Conducting Workshop, receiving the opportunity to conduct the Saint Paul Orchestra.

Returning to IU in 1992, Richards served as the director of admissions for the IU School of Music, eventually becoming the associate dean of admissions and financial aid. He was appointed dean in 2001.

Richards received the IU Bicentennial Medal in August 2019 in recognition of his distinguished service as dean of the Jacobs School of Music at Indiana University Bloomington.