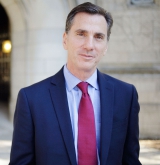 Lee Feinstein is the founding dean and professor of International Studies at the Hamilton Lugar School at Indiana University Bloomington. Feinstein earned his A.B. from Vassar College, M.A. from City College of New York, and J.D. from Georgetown University. Prior to coming to Indiana University, he served as U.S. Ambassador to the Republic of Poland (2009-2012). Before that he was a senior fellow and deputy director of studies at the Council on Foreign Relations, specializing in U.S. foreign policy, international institutions and national security affairs. He served on the Presidential Transition Team for President Obama and as principal deputy director and member of the Policy Planning Staff at the Department of State from 1994-2001.

Feinstein serves on the board of the U.S. Holocaust Memorial Museum, a presidential appointment, and is a member of the Museum's Executive Council. He is a member of the Council on Foreign Relations, and serves on the board of the Kosciusko Foundation, on the advisory council of the Indiana University Center for Global Health, and on the Indiana Advisory Committee on U.S. Global Leadership Coalition.

A decorated statesman, Feinstein was awarded the Commander's Cross with the Order of the Star of Merit of the Republic of Poland by Polish President Komorowski in 2012. He also received two medals from the Veteran's Association of Combatants of the Republic of Poland and Former Political Prisoners for his leadership in strengthening security cooperation between Poland and the United States.

Feinstein received the IU Bicentennial Medal in August 2019 in recognition of his distinguished service as founding dean of the Hamilton Lugar School of Global and International Studies at Indiana University Bloomington.