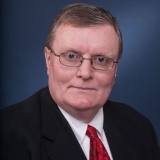 Wallace served in several administrative roles which prepared him well for leadership of the IU-Southeast campus: as provost and senior vice chancellor, two deanships of Arts and Sciences Colleges, a directorship of a state's designated Honors College in the liberal arts and sciences, a division head, a director of writing, and as a university writing center director. In addition to numerous academic articles/book chapters and national and international conference presentations. Wallace has published five books, including two award-winning volumes on the teaching of writing. His post-doctoral work includes a Fulbright-Hayes funded research project to South Africa, work at Harvard in the Management and Leadership in Higher Education Program, and a Japan Foundation-funded research tour of Japanese universities and high schools.

Wallace received the IU Bicentennial Medal in August 2019 in recognition of his distinguished service as chancellor of Indiana University Southeast.