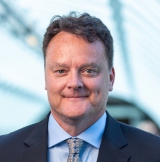 Robert Rebein is the interim dean and profesor of english in the School of Liberal Arts at IUPUI. Rebein earned his B.A. from the University of Kansas, M.A. from Exeter University (England), Ph.D. from the State University of New York at Buffalo, and an M.F.A. from Washington University in St. Louis. Rebein's academic interests include creative writing (fiction, creative nonfiction), contemporary American fiction, and twentieth-century American literature.

Rebein received the IU Bicentennial Medal in August 2019 in recognition of his distinguished service as interim dean of the School of Liberal Arts at IUPUI.