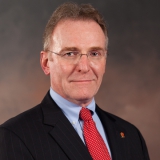 Lowe's research focuses on the field of modern Irish history. His book, The Irish in Mid-Victorian Lancashire: The Shaping of a Working Class Community, was published in 1989, and he has published articles in historical journals like Irish Historical Studies and the Irish Economic and Social History. In 1990, Lowe was named a Fulbright Scholar conducting research at Trinity College, Dublin.

William J. Lowe received the IU Bicentennial Medal in August 2019 in recognition of his distinguished contributions as chancellor of IU Northwest.