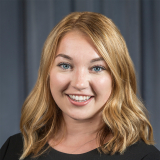 Molly Connor is an alumna of IU Bloomington and a student member of the IU Board of Trustees. Connor earned her B.S. in public management and leadership from the O'Neill School of Public and Environmental Affairs. She is currently a law student at the McKinney School of Law at IUPUI. She was appointed as the student trustee in 2019.

During her undergraduate career, Connor served as the student body vice president of the IU Student Association, now Undergraduate Student Government, and was co-chief of state and legislative affairs. She served as president of the Zeta Tau Alpha sorority and represented the national organization at the Fraternal Commission Congressional Hill Visit in Washington, D.C. From 2016 to 2017, she was a member of the executive board of the Association of Big Ten Students and conference coordinator. In 2017 she held an internship for the coordinator for sustainable economics of the National Government of Chile in the Ministry of Finance.

Connor received the IU Bicentennial Medal in September 2019 in recognition of her service as a student trustee for the IU Board of Trustees.