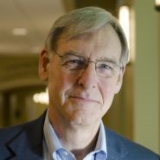 Douglas E. Van Houweling of Kansas City, Missouri, graduated in 1965 with a B.S. in Government from Iowa State University. He earned his Ph.D. in Government from IU Bloomington in 1974 under the guidance of his advisor, Nobel laureate Elinor Ostrom. Van Houweling has served higher education for 34 years in academic and administrative positions at Cornell University, Carnegie Mellon University, the University of Michigan and most recently at the nonprofit University Corporation for Advanced Internet Development.

Since 1968 Van Houweling has provided consulting and educational services to a broad array of organizations. While the majority of his clients have been in higher education, he has undertaken substantial assignments in business and government. During the 70's, General Electric, the Center for Naval Research, Southern Simulation Service, the U. S. Air Force, the American Association of Railroads and Dow Chemical contracted for support in the construction of computer simulation models of significant business processes.

Van Houweling has worked extensively with IU administrators and faculty in the development of the Internet2 project, which leads higher education's continuing role in internet development. Van Houweling's leadership in the creation of the Internet2 project, as well as the Abilene network, has proved essential in the growth of information technology on college campuses and the manner in which universities access the internet. Through Internet2, universities now have the necessary network capacity required for massive data sets.

Van Houweling was inducted into the Internet Hall of Fame in 2014. And, in 2017, Indiana University awarded him with an Honorary Doctor of Humane Letters at its spring undergraduate commencement ceremony in Bloomington, Indiana for outstanding achievement in the arts and humanities, and for community engagement and public service.